“Hope Stanley was pleasantly surprised by the acceptance of his synopsis. The check which I sent to DC to be forwarded to him has probably already reached him.” [Jerry Siegel letter to Josette Frank, June 1, 1942] 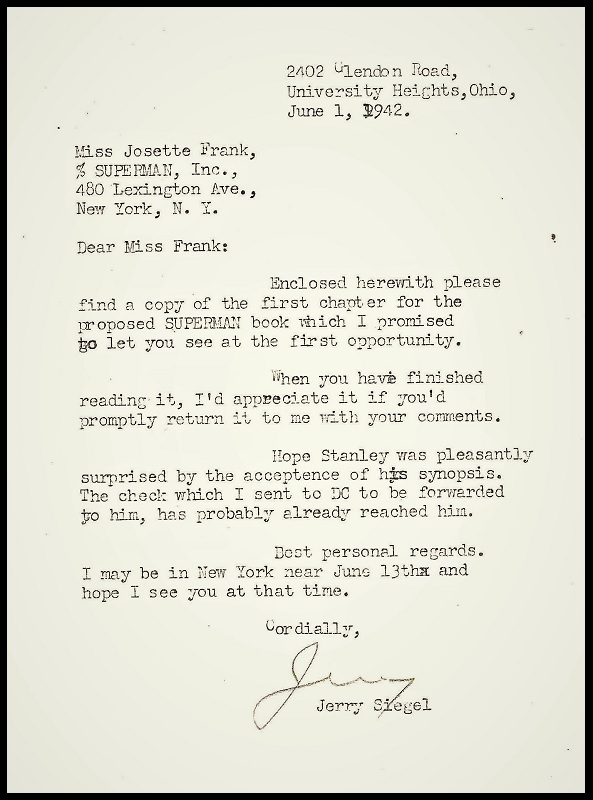 Although Siegel had gotten the name of Franks’ son wrong (it was Stephen), it was the act of kindness on his part that mattered. Siegel’s approval of an idea Stephen had for a Superman story had garnered the young boy payment for it.

The real reason for the letter, however, was to get Frank’s opinion on something else.

“Enclosed herewith please find a copy of the first chapter for the proposed SUPERMAN book which I promised to let you see at first opportunity.”

“When you have finished reading it, I’d appreciate it if you’d promptly return it to me with your comments.” [Siegel, ibid.]

The fact that Siegel was seeking Frank’s comments on this first chapter of his book made sense. She had been hired by Robert Maxwell, producer of the “Superman” radio program, in early 1940, as a consultant on radio scripts. Over time, her role grew, and she not only found herself working for Maxwell, but also DC and All-American Comics as an editorial advisor. She was a major influence upon the editorial guidelines used by the comic book writers and artists. Perhaps most importantly, she also was employed by Superman Inc., the overseers of all things having to do with National Comics franchise character. And in that role, she had much to do with how the Man of Steel was presented to the public.

Frank’s primary occupation was as a children’s literature expert for the Child Study Association of America (CSAA). It was her expertise in that area and her open-minded views on what children should be allowed to read in a book or hear on radio that led Maxwell to approach her and ask her to read over the radio scripts. Her opinions were respected not only by Maxwell, but on the comic book side as well, particularly by All-American’s co-owner Max C. Gaines, who sought her guidance frequently when it came to the depiction of Wonder Woman.

So, Siegel was turning to a well-trusted advisor when he asked Frank to read over his chapter. It is unknown exactly what Frank’s reaction was, but the fact that the Superman book that was eventually released was written by George A. Lowther and not Siegel is perhaps an indication of her opinions. 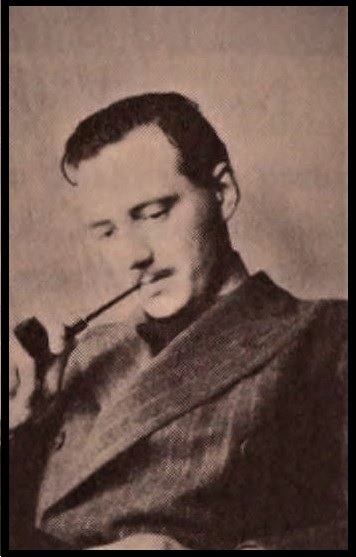 Lowther was not a random choice. By 1942, he had been in the radio business for 15 years, going back to 1927, when he was hired on as one of the first pages at NBC’s new studios in New York City. He gradually moved into script writing and was best-known as a writer on Terry and the Pirates, Dick Tracy, and had recently put in a stint on The Shadow. He was a natural fit for Superman, and by September 1942, he was both writing and directing the program. When the need arose, he also narrated and filled in when they were short of actors. Various trade publications and news articles touted his multi-tasking and sometimes referred to him as “Radio’s Orson Welles,” apparently forgetting that Welles himself had started in radio.

It may simply had been that whoever made the decision as to who was to write the Superman book, wanted an experienced writer to do the work. Or it could be that Frank read Siegel’s first chapter and recommended it be assigned to somebody else. If so, it is understandable.

Based upon this chapter, Siegel’s writing style can best be summed up as “pulpish.” His overheated descriptions and florid flourishes were obviously influenced by the pulp magazines he had read. At times, his writing was cringe-worthy and surprisingly amateurish, considering that he had been writing comic books professionally for years.

Consider this excerpt describing Jor-L’s reaction when he finds out his wife Lora (eventually renamed Jor-El and Lara) has given birth:

“A SON!” he repeated. The exultation in his voice was similar to that which has choked the vocal chords [sic] of every new father since the beginning of time.”

“A mighty leap sent the blue-clad figure soaring high into the sky. “A SON! A SON! A SON!”

“And now commenced a series of aerial acrobatics so breathtaking and involved that even seasoned SUPERMEN, looking up from the twisting elevated streets, gasped. To the right—to the left—then up—then down—in—out…here, there, flashed the figure. Around and around, upside down, high above the clouds, then only inches from the ground, then up—up—up…soaring so high into the blue that Jor-L seemed to dwindle to a mere speck! [Siegel, Jerry, “The Origin Of Superman,” pg. 10, 1942.]

Hopefully, Frank was kind to Siegel when she gave her evaluation. The result was clear, though, and on November 2, 1942, THE ADVENTURES OF SUPERMAN was released. 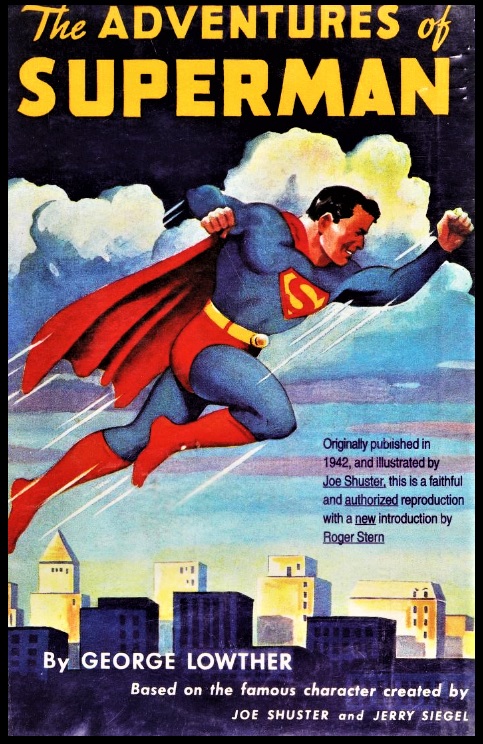 THE ADVENTURES OF SUPERMAN by George Lowther (1942)

Josette Frank was chosen to write the foreword to Lowther’s book and she used it to present her vision of Superman and how he fit in with other American folk heroes. 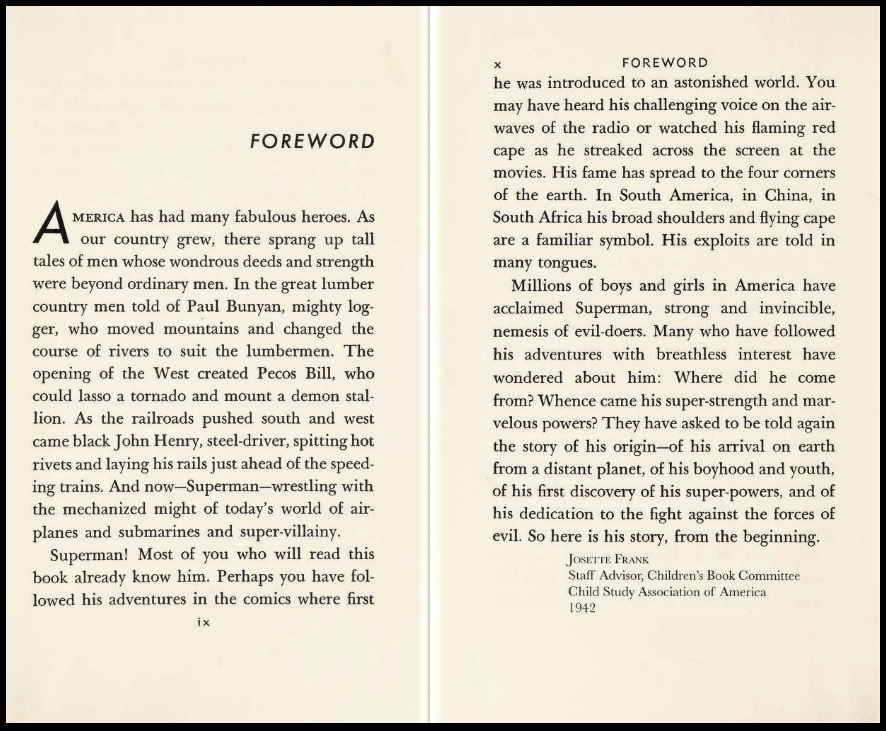 Josette Frank foreword to THE ADVENTURES OF SUPERMAN (1942)

“America has had many fabulous heroes. As our country grew, there sprang up tall tales of men whose wondrous deeds and strength were beyond ordinary men. In great lumber country men told of Paul Bunyan, mighty logger, who moved mountains and changed the course of rivers to suit the lumbermen. The opening of the West created Pecos Bill, who could lasso a tornado and mount a demon stallion. As the railroads pushed south and west came John Henry, steel-driver, spitting hot rivets and laying rails just ahead of the speeding trains. And now–Superman–wrestling with the mechanized might of today’s world of airplanes and submarines and super-villainy.” [Frank, Josette, Foreword, ADVENTURES OF SUPERMAN, pg. ix, 1942.]

It should be remembered that Siegel, and Joe Shuster, no longer owned the rights to Superman, so the decisions regarding the marketing of the character were not theirs to make. Still, it had to be hard for Superman’s creator to take, especially when he would read articles crediting Lowther for creating the character.

Below is the first chapter of Jerry Siegel’s SUPERMAN book, entitled The Origin of Superman, exactly as he submitted it to Josette Frank for her review.

Material used on this site is presented for historical purposes only. All copyrights belong to the respective copyright holders and no further reproduction is allowed without the expressed written consent of those copyright holders. 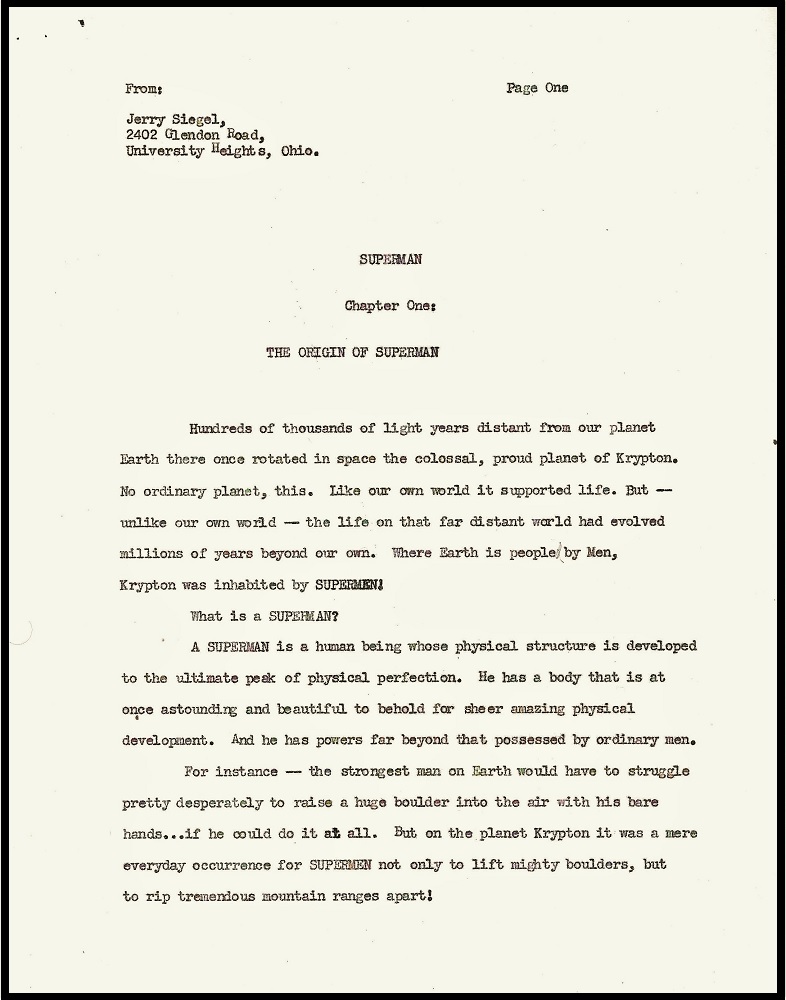 “The Origin of Superman” by Jerry Siegel, pg. 1 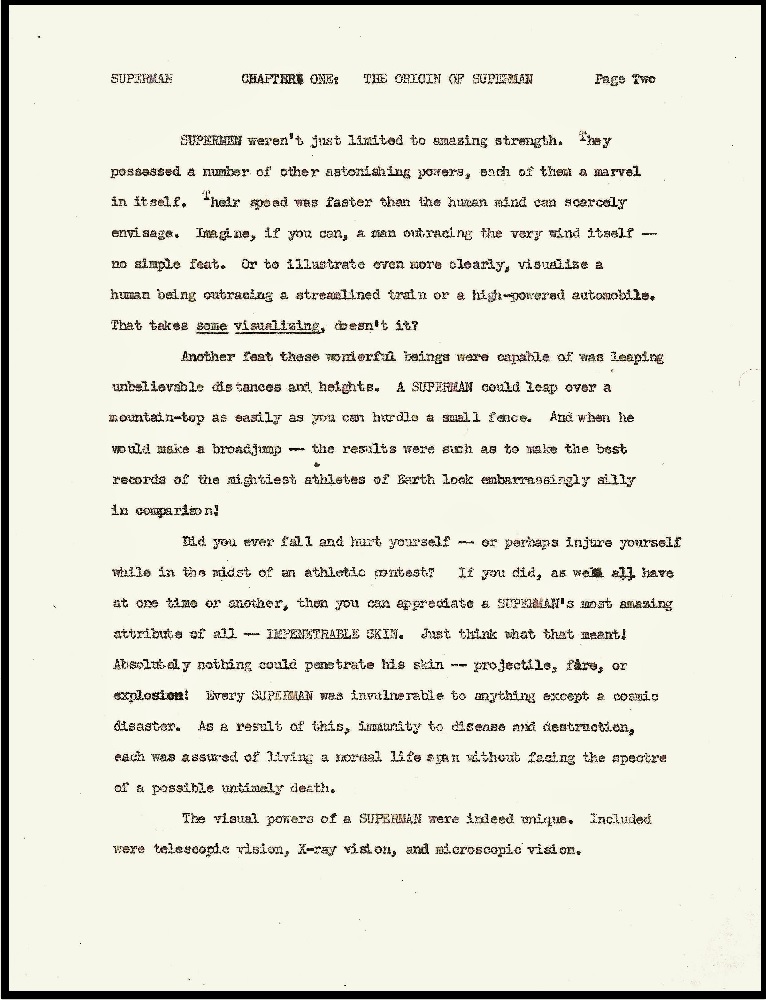 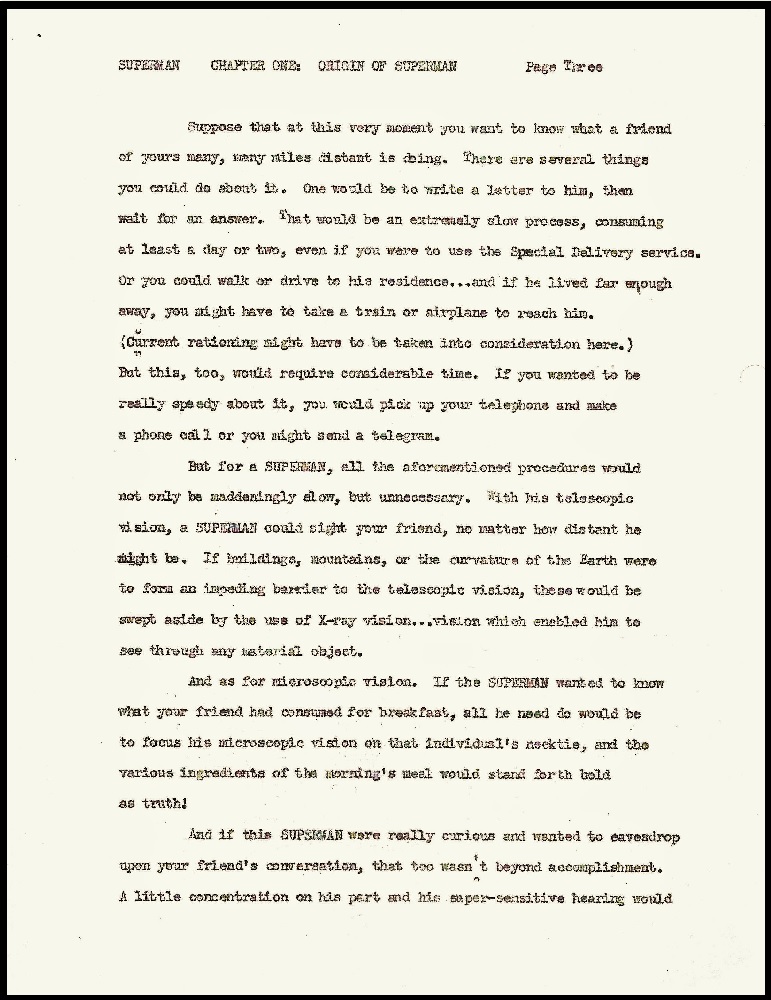 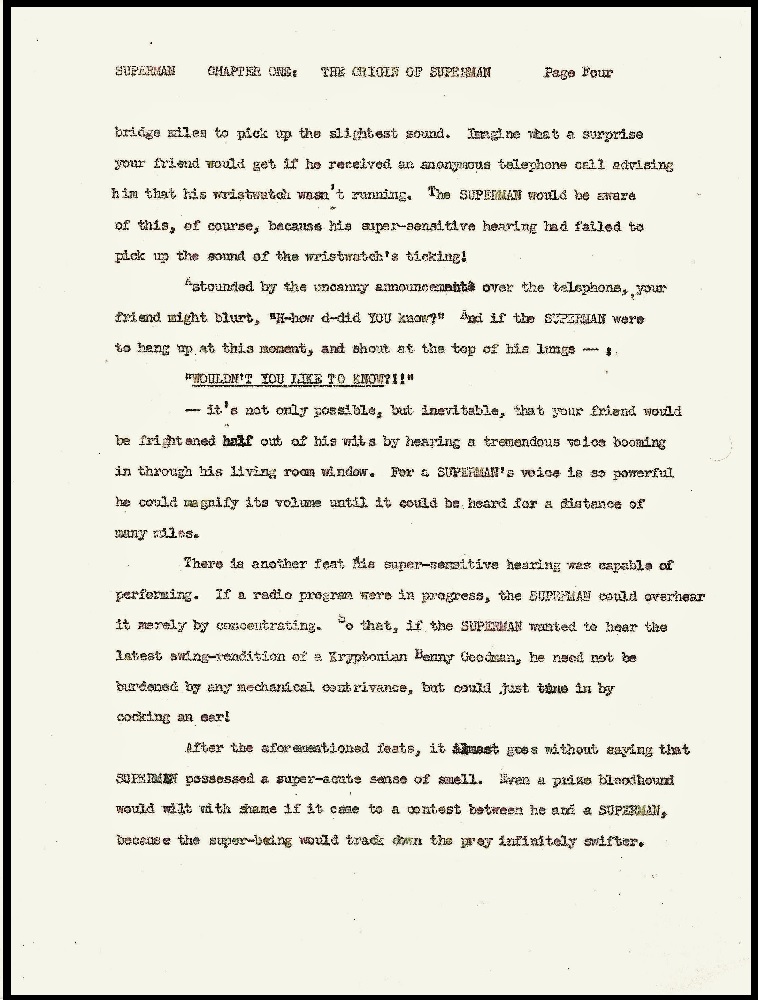 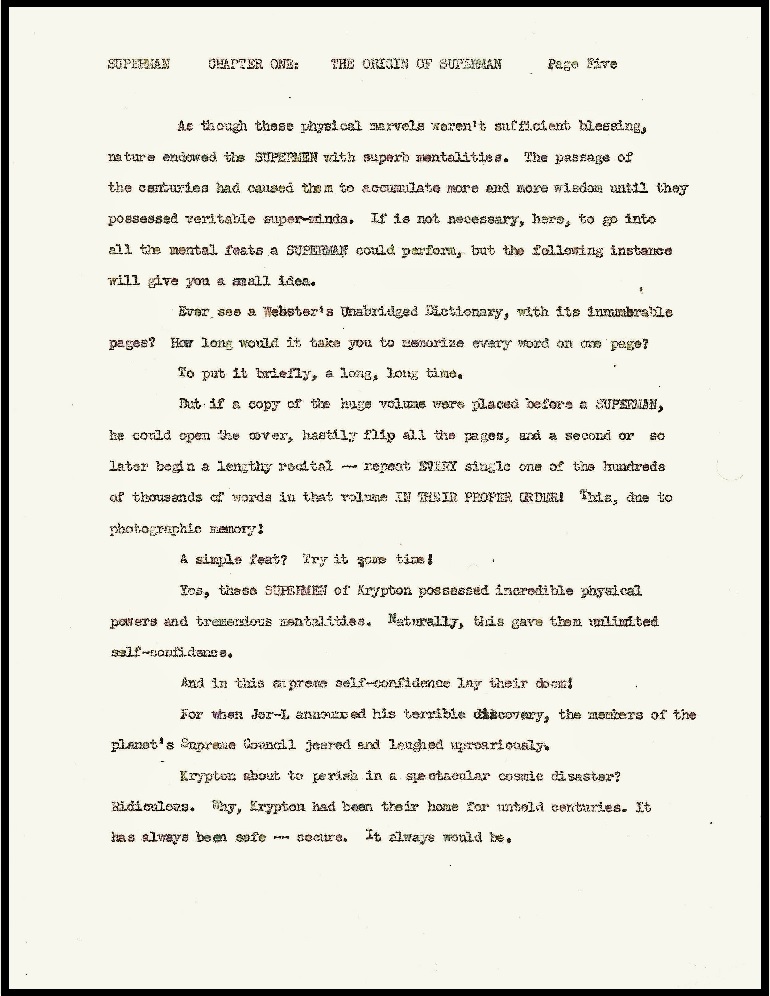 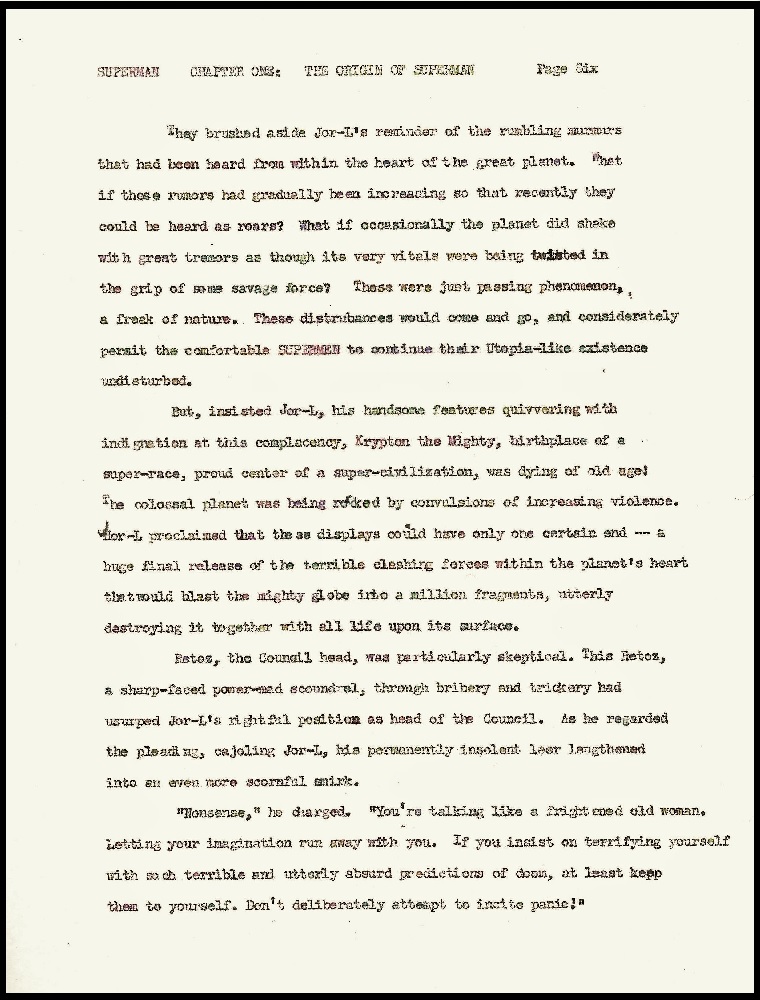 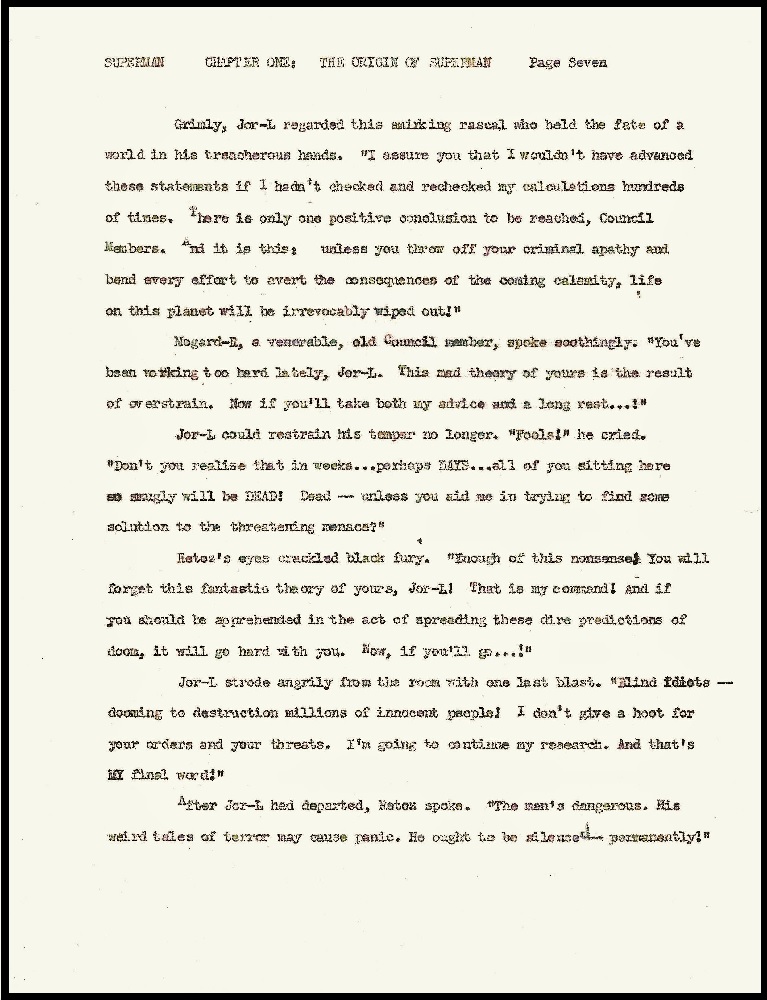 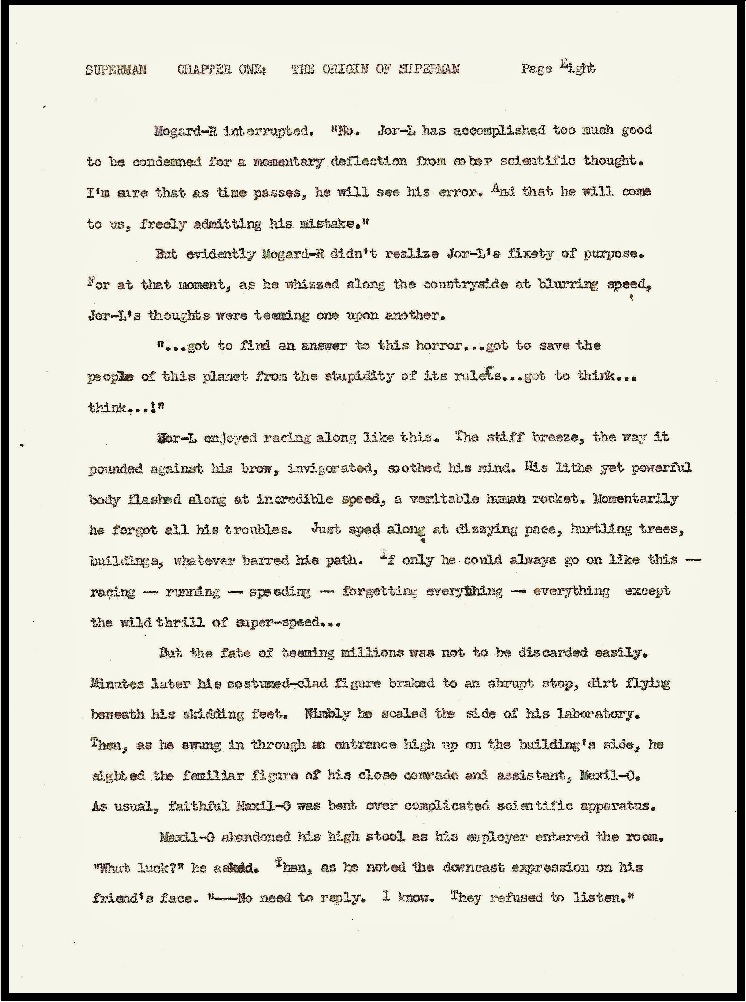 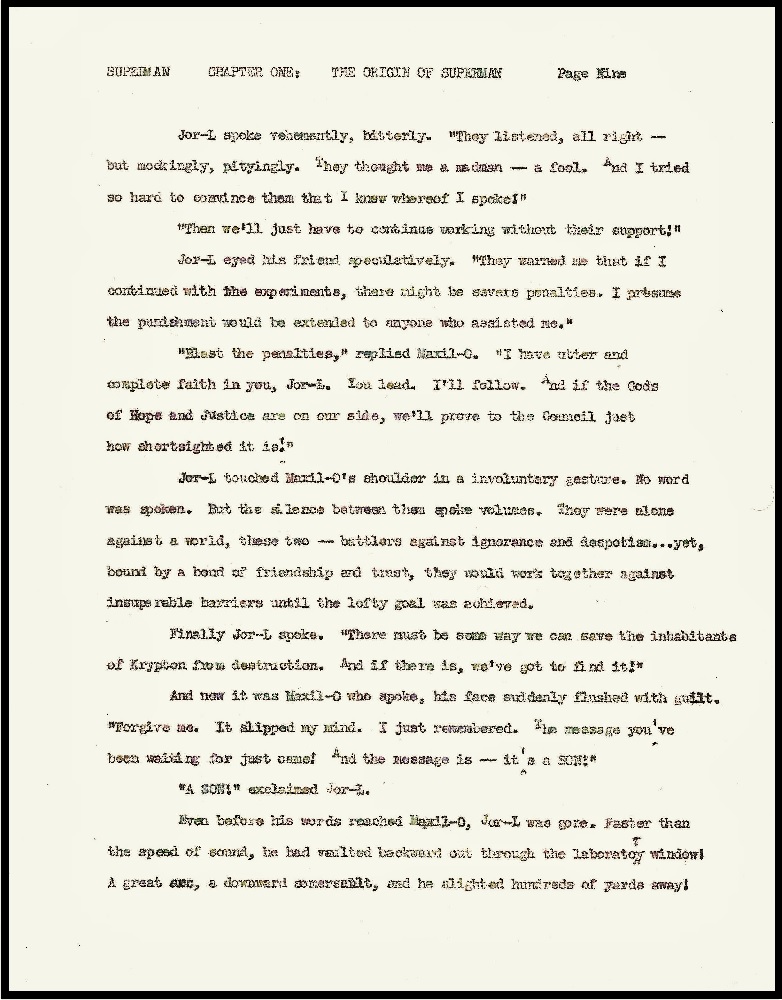 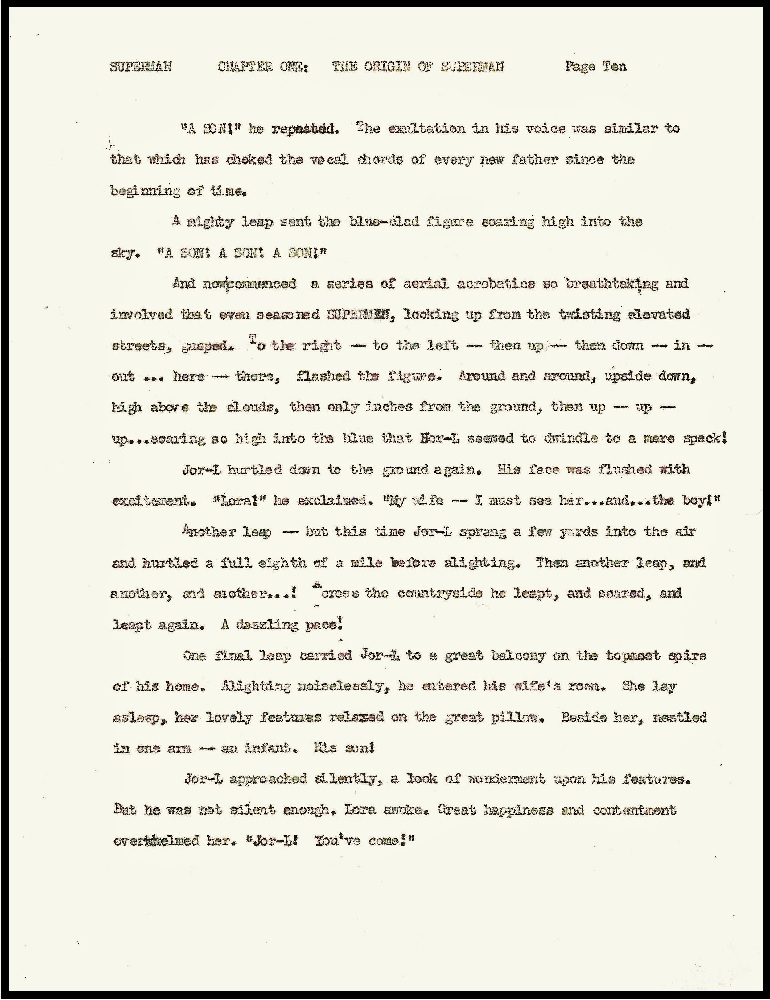 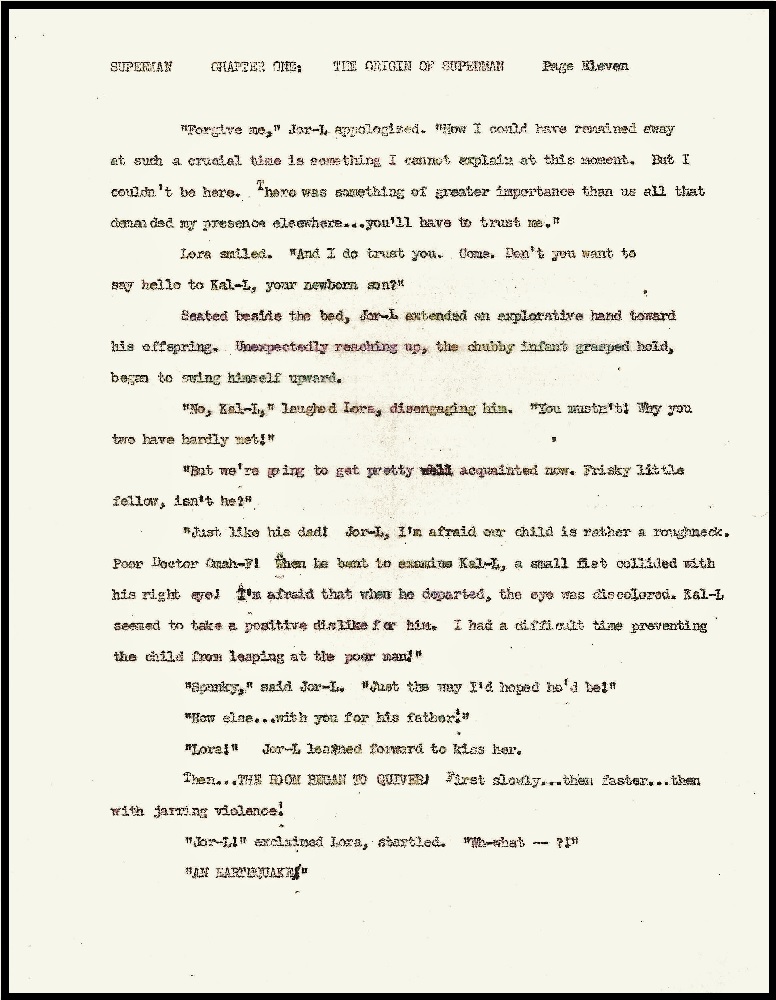 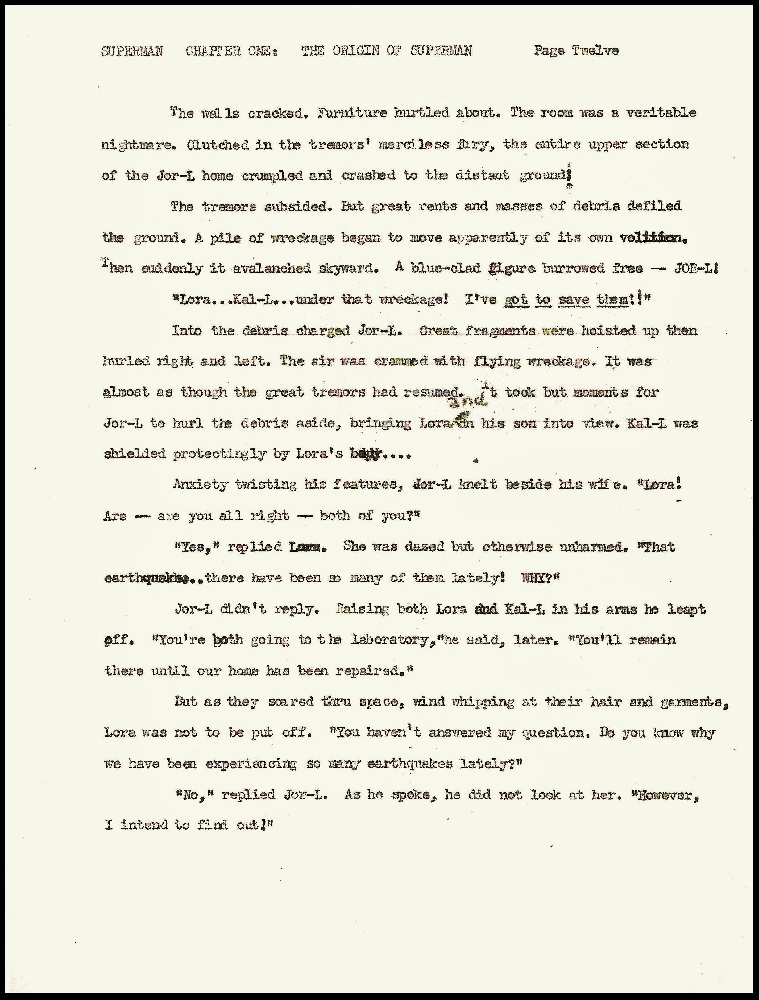 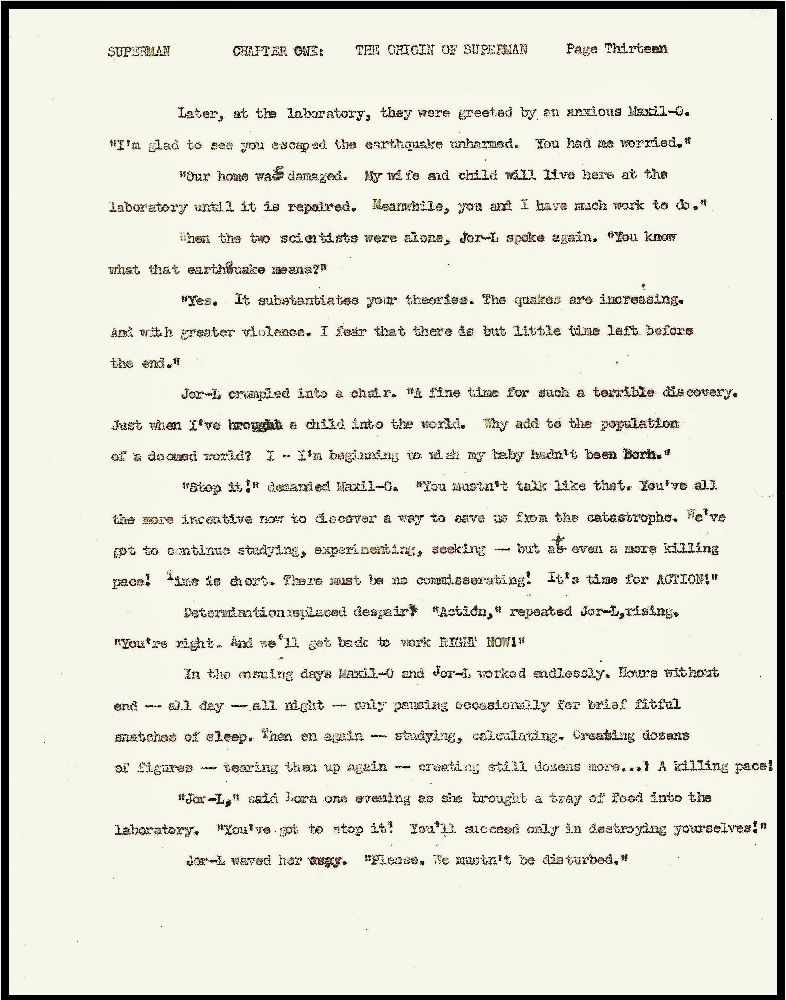 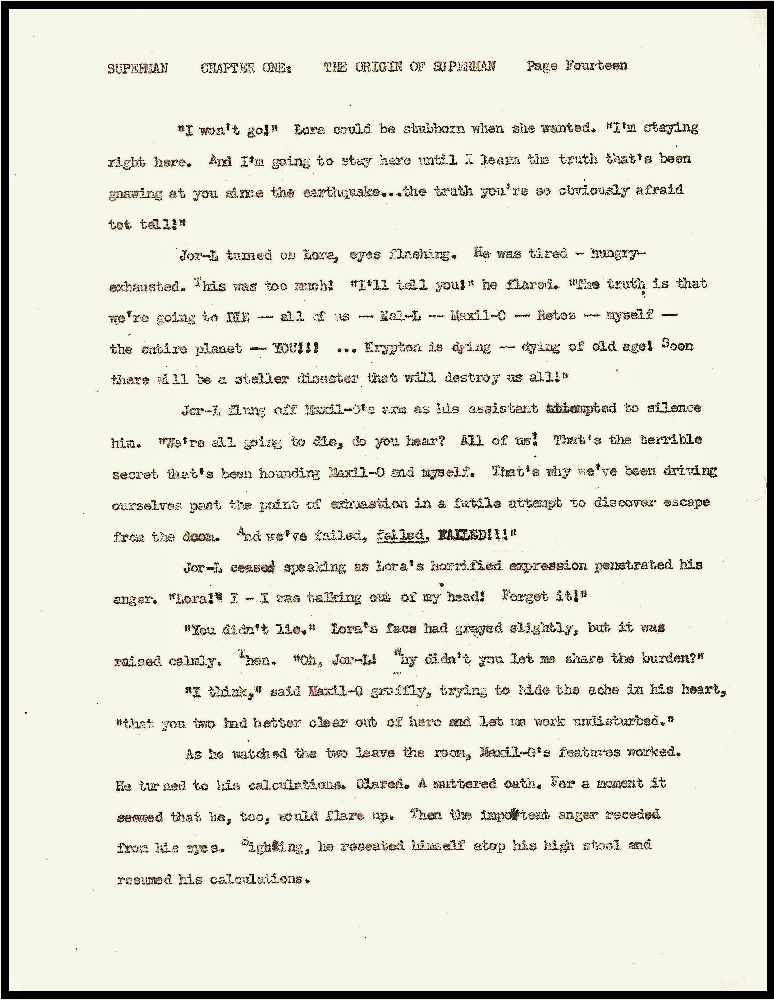 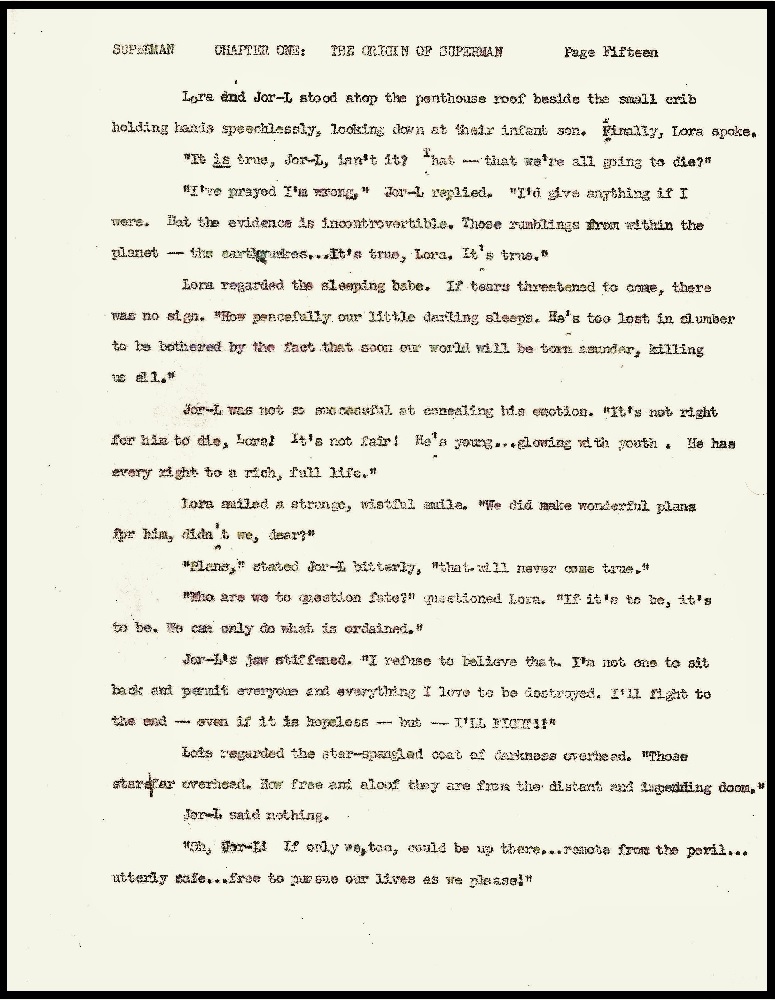 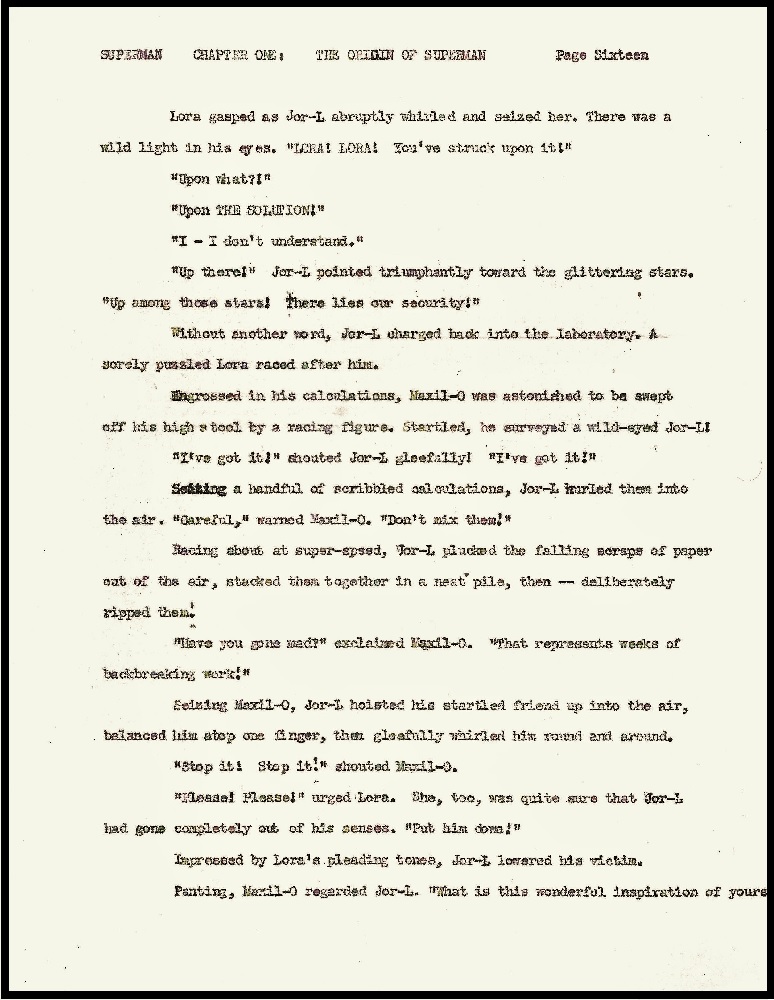 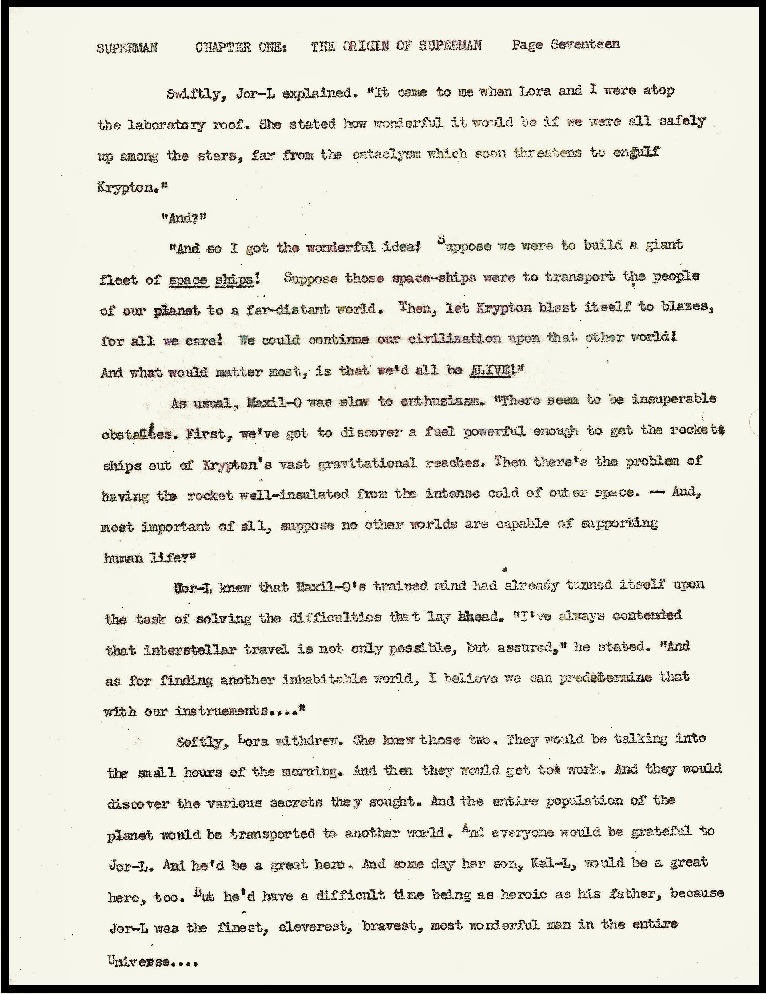 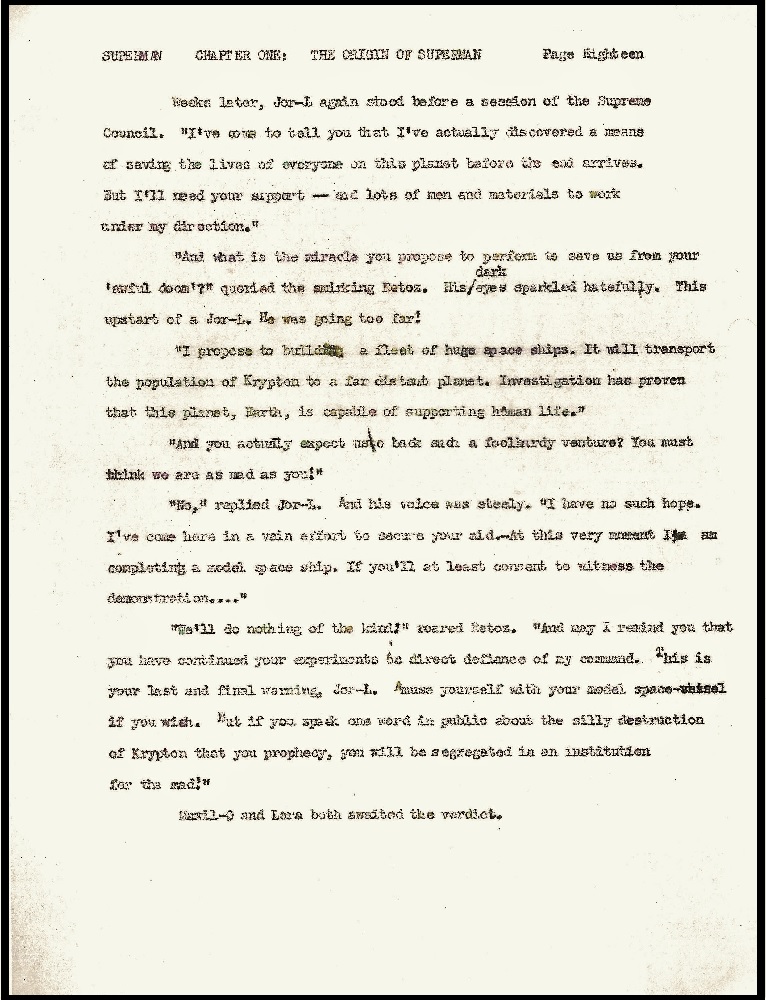 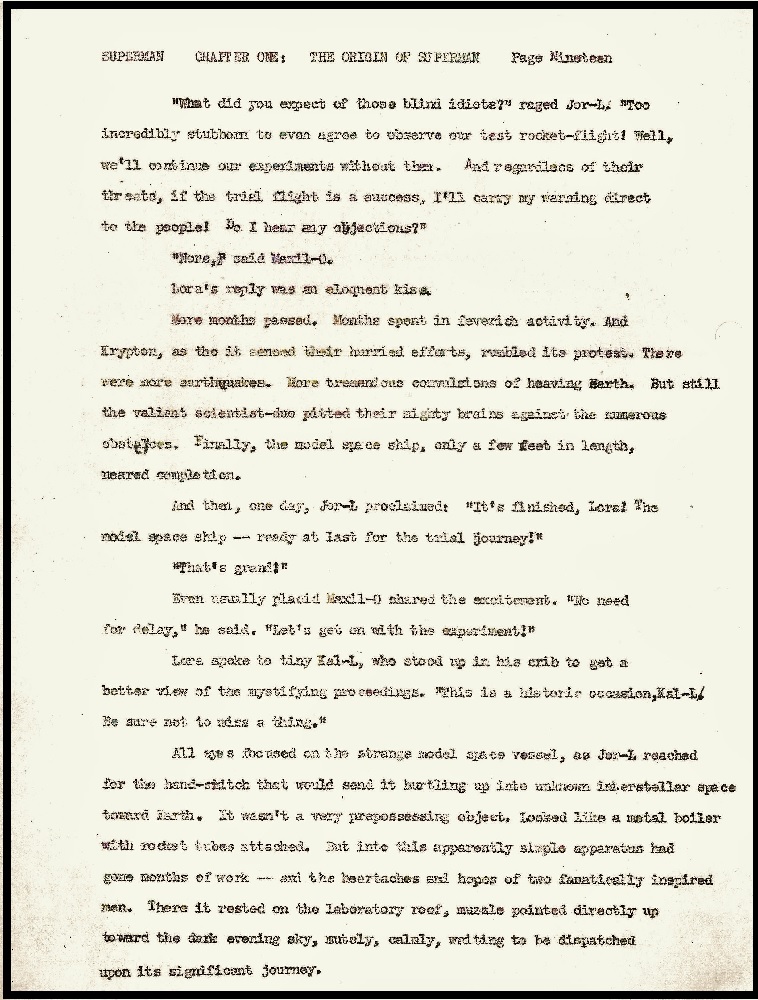 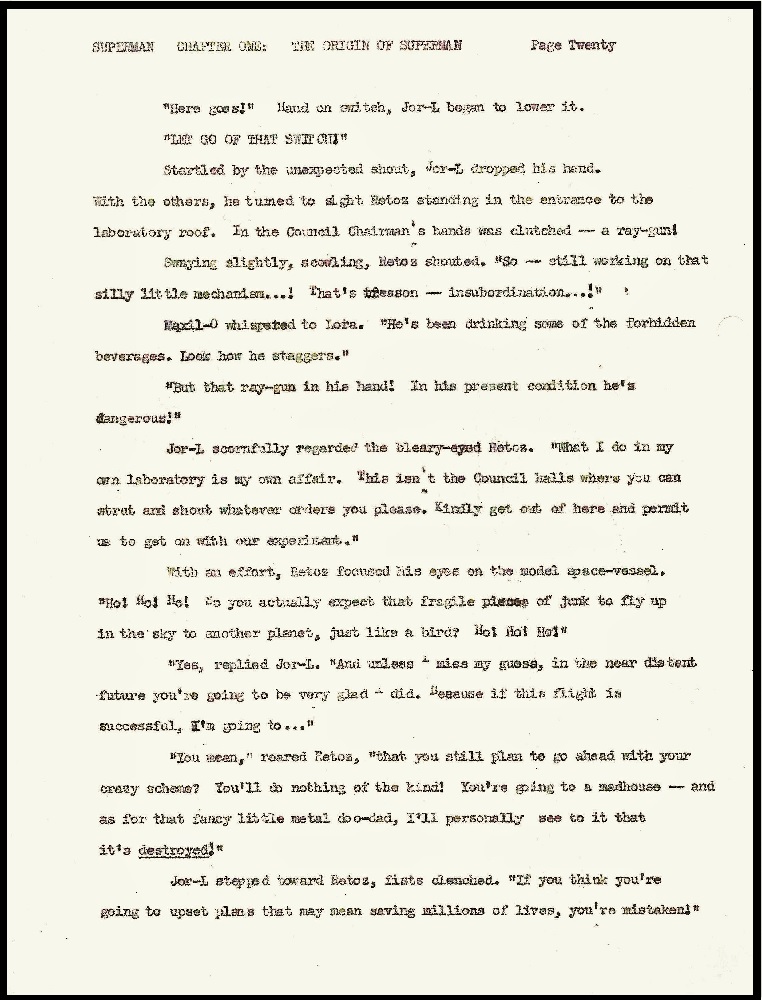 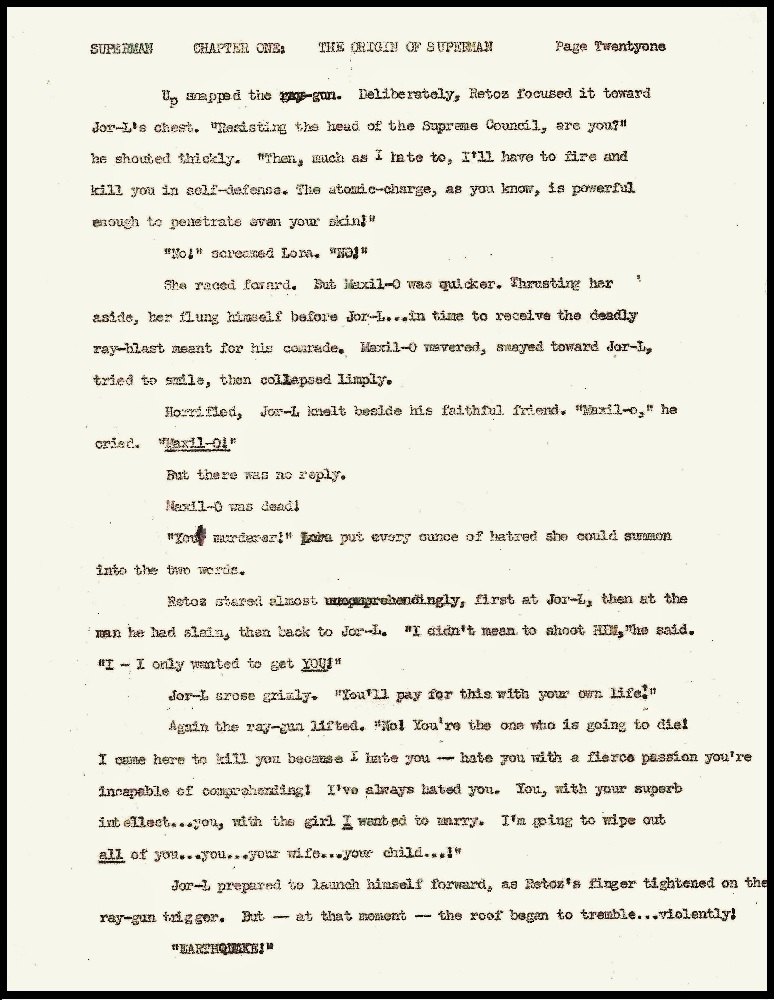 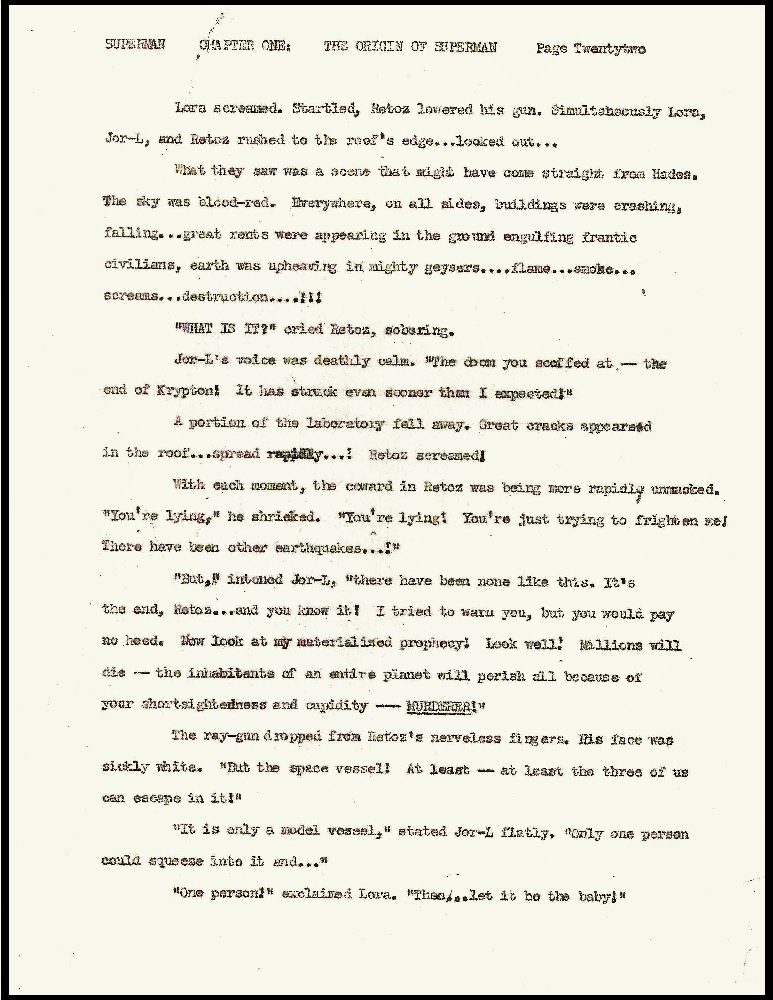 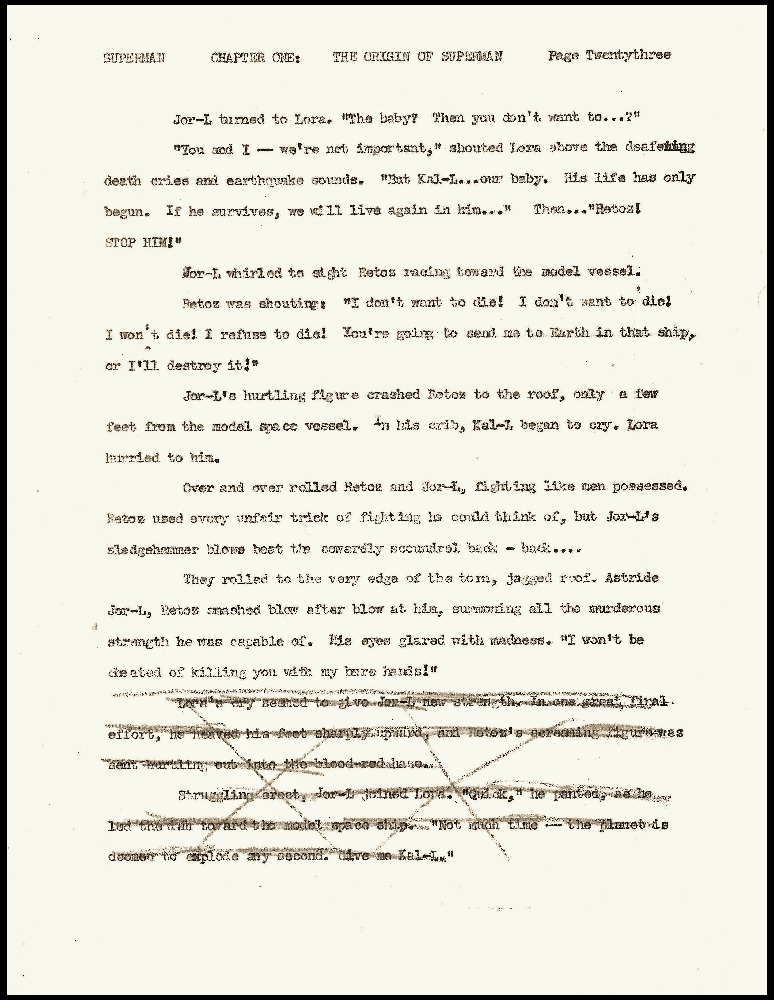 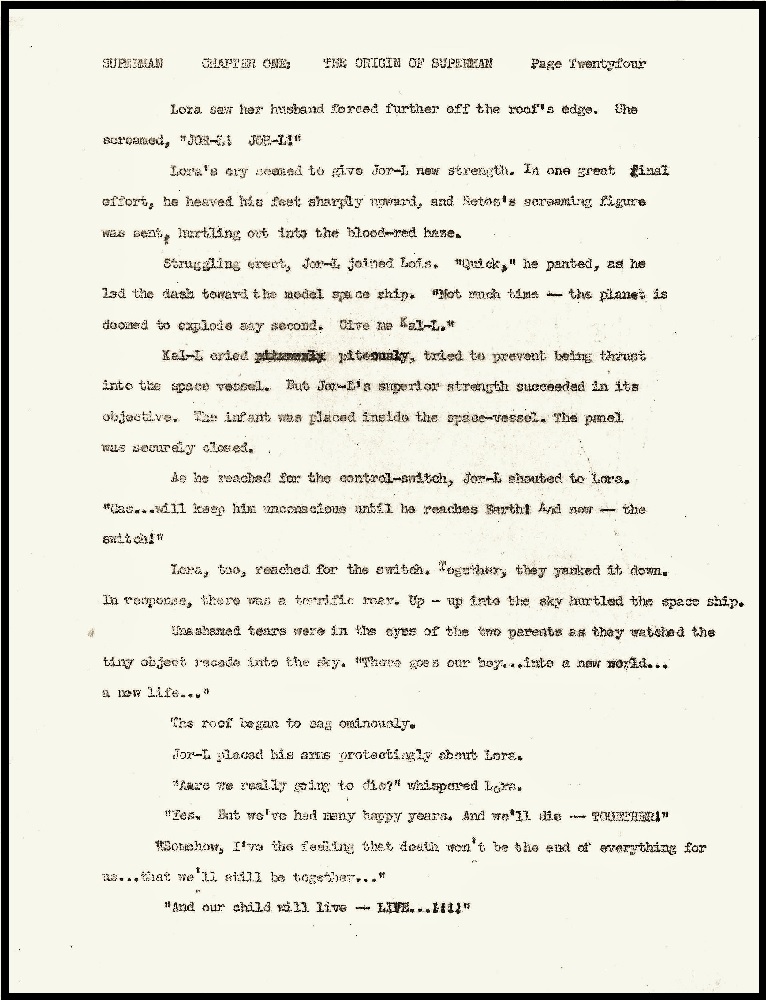 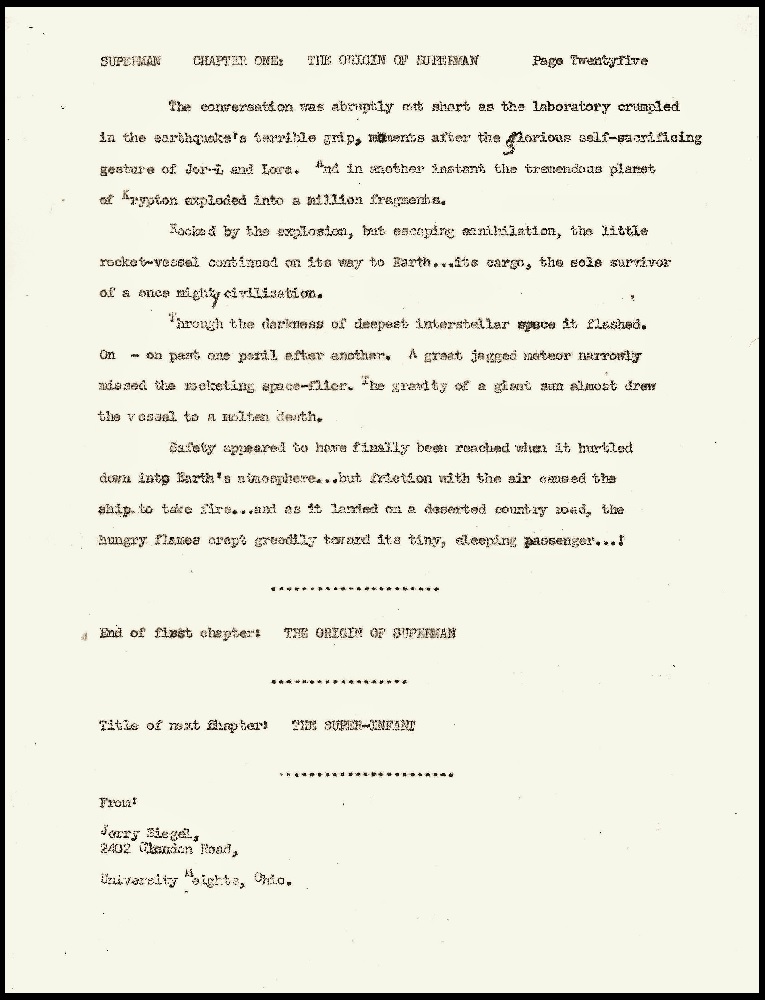