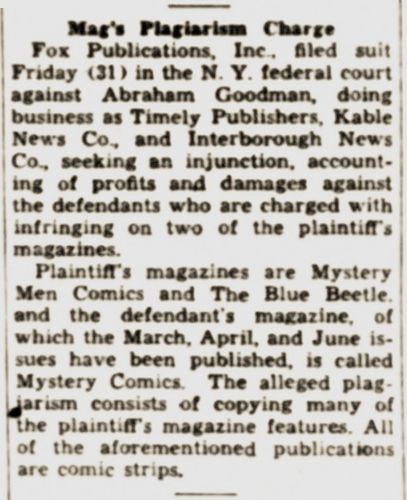 Several years back, I discovered this short piece in a 1940 issue of VARIETY concerning a a lawsuit filed by Victor S. Fox and Fox Publications, against Timely Publications, et. al. The article below gives some background to this suit, but unfortunately, at this time I haven’t found out whether this even went trial. I welcome any further information anyone can share regarding this lawsuit and its outcome.

By all accounts, Victor S. Fox was not a nice guy. Arrogant, sneaky and undeniably crooked. His life was full of shady dealings going back to WWI, when he tried to bill the federal government for repairs to a ship that he never made. Then there was that stock scandal in the Twenties.

So it was no surprise when Fox was dragged into court by Detective Comics (DC) in April, 1939, for infringing on their franchise character, “Superman”. A trial ensued, Fox lost. And he wasn’t happy about it. Fox had ordered a young Will Eisner to blatantly copy “Superman,” which Eisner did, resulting in the similarly powered, “Wonder Man.” Even though Eisner backed Fox’s version of events during the trial, Fox blamed the young artist for losing the case. To get back at Eisner and his partner, Jerry Iger, Fox refused to pay them for material they had already supplied to his comics. Understandably, Eisner and Iger stopped working for Fox around November of 1939, and he immediately placed an ad trying to recruit members of their comic studio to come work for him. For the most part, his ad failed. 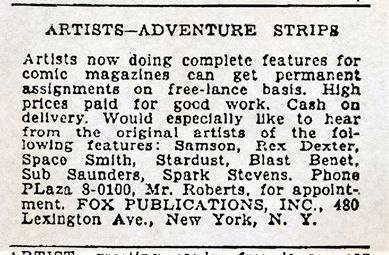 Still, that didn’t stop Fox from publishing comics, as he hired a new guy to edit his comics. A guy named Joe Simon. Simon’s tenure as editor lasted a few months, until he got a job editing over at Martin Goodman’s Timely Publications.

And this is where the story gets interesting.

I’ve discovered an article in the June 5, 1940 edition of VARIETY referencing a lawsuit Fox had filed against Timely.

“Fox Publications Inc. filed suit Friday (31) in the N.Y federal court against Abraham Goodman, doing business as Timely Publishers [sic], Kable News Co., and Interborough News Co., seeking an injunction, accounting of profits and damages against the defendants who are charged with infringing on two of the plaintiff’s magazines.”

“Plaintiff’s magazines are Mystery Men Comics and the Blue Beetle and the defendant’s magazine, of which the March, April and June issues have been published, is called Mystery [sic] Comics. The alleged plagiarism consists of copying many of the plaintiff’s magazine features. All of the aforementioned mentioned publications are comic strips.”

A lot is going here, it’s a bit confusing and it’s not helped by a few factual errors in this article.

The comic book Fox claimed infringed upon his two comics was actually MYSTIC. Perhaps the person writing this piece confused it with Timely’s flagship title, MARVEL MYSTERY COMICS. And of course, it was Timely Publications, not “Publishers”. 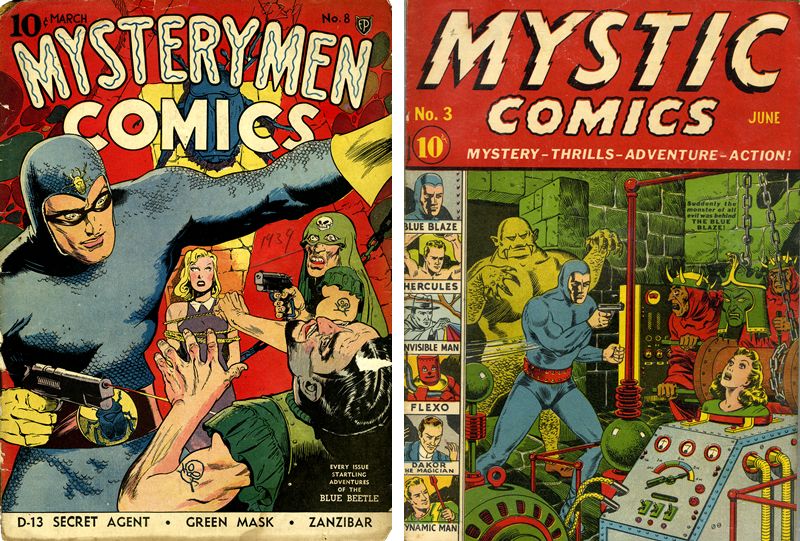 Abraham Goodman was the brother of company founder, Martin Goodman, and at the time of the lawsuit, Abraham was listed as the Publisher of Timely in owners statements.

With no other information than what is contained in this short article, I tend to believe that this entire case was purely vindictive. Fox getting back at as many people as he could at one time. Follow my line of reasoning.

On May 2, 1940, Fox had lost his appeal of the DC lawsuit. This suit was filed later that same month. The other two defendant’s in Fox’s suit against Timely were Kable News and Interborough News. Both were distributor’s of Fox’s comics, so why would he sue them?

Well, both distributors had also been defendants along with Fox in the DC lawsuit. While nobody from Interborough testified in that case, Warren Angel, General Manager of Kable, did. In fact, he was called as a witness for the plaintiff, DC. While he didn’t say anything too incriminating about Fox, it stands to reason that Fox wasn’t happy about his appearance on the stand.

Secondly, why go after Timely? By mid-1940, comic book publishers had sprung up like mushrooms, and most had a super-hero or more in their books. So why single out Timely and why only that one comic, MYSTIC?

Let’s backtrack. When Eisner and Iger split, Fox hired Joe Simon as editor. According to most histories, Simon’s first job as “freelancing” editor at Timely was on RED RAVEN COMICS, cover dated August, 1940. The actual date that comic hit the newsstand was May, 29, meaning that Simon was on the premises at Timely in the spring of that year. Fox must have been angry about Timely hiring away his editor, accounting for their place in this suit. 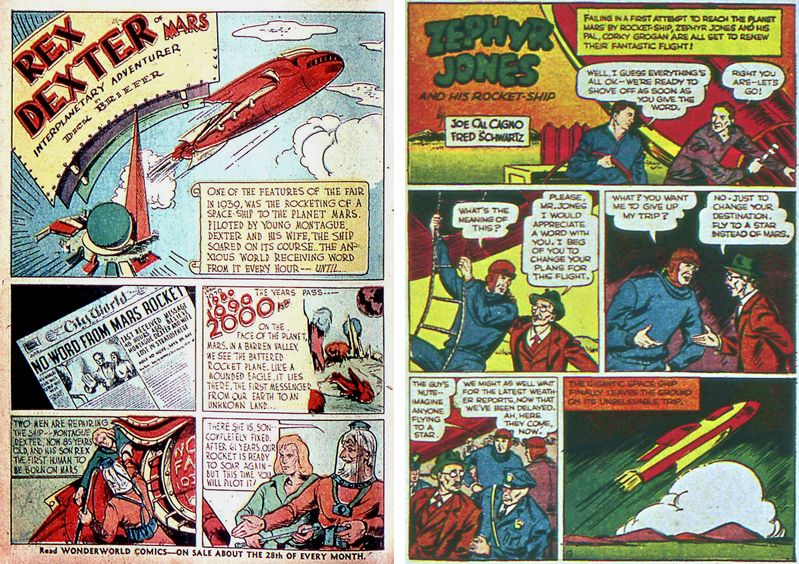 As for MYSTIC COMICS, there was a bit of validity in his citing that particular comic. The star of MYSTIC was a blue-garbed crime fighter named, “The Blue Blaze”. Over the course of the first three issues of this book, the issues cited in the lawsuit, “The Blue Blaze” came to look more and more like Fox’s star player, “The Blue Beetle”. The cover to MYSTIC COMICS #3 in particular could easily pass for a BLUE BEETLE cover. There are also some similarities between Fox’s “Rex Dexter” and Timely’s “Zephyr Jones”, Fox’s “Zanzibar the Magician” and “Dakor the Magician” at Timely. 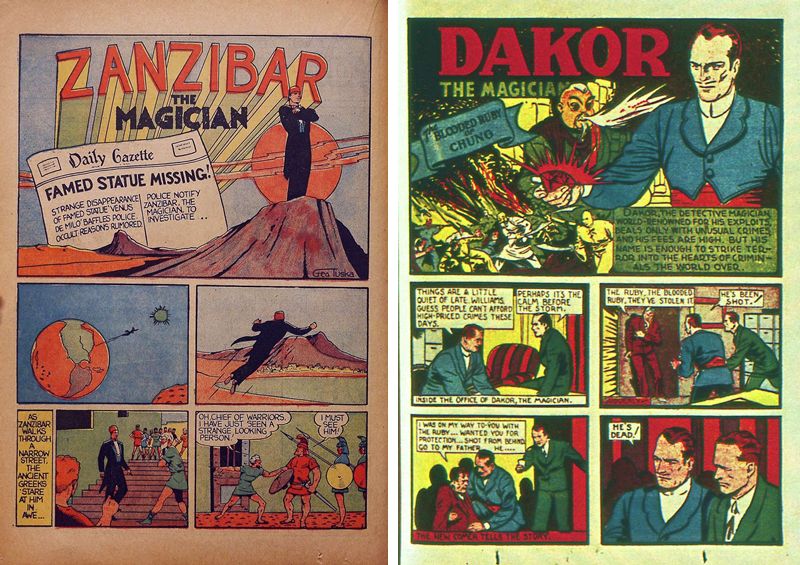 Lastly, there was a change ongoing at Timely, as Simon was tasked with putting together an in-house staff to replace the shops (Funnies, Inc. and Chesler) that had been supplying the majority of material for the company up to that point. If you look at MYSTIC #4 (July-Aug. 1940), you’ll notice Eisner and Iger staffer, Klaus Nordling’s work on the “Thin Man”. At about the same time, Fletcher Hanks, another member of that shop, had done some work on Timely’s DARING MYSTERY COMICS. Although the bulk of the work at Timely came out of Lloyd Jacquet’s Funnies, Inc. comic shop, it may have been that Iger (he and Eisner had just ended their partnership) was making inroads at Timely.  Perhaps Fox found out and sought to spite Iger..

To this point, I haven’t been able to find out what happened with this lawsuit. I do know that Timely ceased publication of MYSTIC COMICS almost immediately, with issue #4 (on sale June 12). The next issue of MYSTIC didn’t appear on the stands until December 31, 1940, with the issue #5 (March 1941). And it had a whole new cast of characters. Obviously, Fox’s suit did have some effect.

I suspect that contemporary issues of EDITOR & PUBLISHER or similar trade publications may have contained more information regarding the lawsuit, but as of now, I haven’t been able to access any of them. Any further information is welcomed and will be fully credited.

[note: The interior scans of the Fox comics used in this article were retrieved from the Comic Book Plus website: https://comicbookplus.com]